It has been reported that Southampton have rejected a bid from Liverpool for Dejan Lovren. 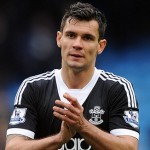 The London Evening Standard claims that Liverpool have seen a bid rejected for Lovren, for a fee thought to be much lower than the reported £20million.

The 24-year-old joined Southampton from Lyon last summer in an £8.5million deal but is keen to leave and reportedly willing to go on strike to force through a move one season into a four-year deal.

The Croatia international centre back is also wanted by Arsenal. Arsenal Not Interested In Selling Jack Wilshere To Manchester City