It has been reported that Southampton striker Rickie Lambert is expected to complete a move to hometown club Liverpool tomorrow. 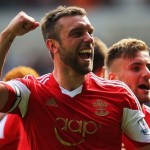 The Daily Mail reported that Liverpool are on the brink of signing Lambert after they launched a shock £4million bid for the England striker.

The 32-year-old is with the England squad preparing for Friday’s game with Peru, but he is expected to be allowed to travel to Liverpool on Saturday for a medical and the switch from Southampton could be completed early next week.

The initial £4m fee will rise according to the appearances he makes.