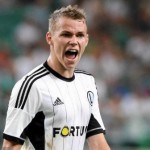 According to The Sun, Southampton have joined the race to sign Legia Warsaw star Ondrej Duda.

It is also suggested that Hull City are showing considerable interest in Duda who was linked with a number of clubs back in January including Arsenal, Tottenham and AC Milan.

Back in the winter transfer period, Polish sports website Gwizdek 24 quoted the player’s father as linking him with at least 11 European clubs.

His father, who also acts as his agent, said: “My son has so many offers I do not even know. The representatives of AC Milan, Inter, Napoli, Hannover, FC Koln, Arsenal, Tottenham, Everton, Hull City, Stoke and even a couple of other teams they have contacted me.

“But everyone, I repeat, that if he leaves the Legia, it will be at the earliest summer.”

The Saints and Tigers are reportedly leading the race for Duda who has been with Legia since joining from Kosice in the winter of 2014.