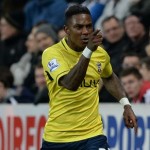 Reports are out claiming that Eljero Elia has implored Memphis Depay to remain with PSV Eindhoven for at least another year.

21-year old Dutch star Depay is being heavily linked with a summer move to Manchester United but his compatriot Elia, who is on a season-long at Southampton, believes it could be too early for such a transfer.

Elia told Voetbal International : “I think it will be best for him to stay at Eindhoven,”.

“My feeling is he should play in the Champions League for PSV then he would have the experience of playing at the highest level in his locker before the moves at 22.

“PSV don’t need the money and I feel Memphis doesn’t need it as he signed a nice contract recently.”