It has been reported that Southampton defender Virgil van Dijk was frustrated in defeat to Manchester United. 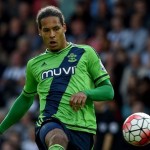 Van Dijk admitted that Saints were left to rue some costly individual mistakes.

He told the Daily Echo: “The first 30 minutes I think we were very dominant and got a couple of chances, but unfortunately we didn’t win.

“We started the way we like to start it. We spoke about it a lot.

“The first 30 minutes was very good, a lot of pressing, a lot of attack and counter attacks and full of attack.

“Losing is always a terrible feeling. I think from defeats you learn the most and that’s what we’re going to do as well.”