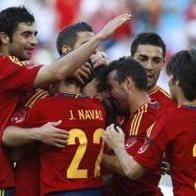 Adrian Lopez scored on his debut to set Spain on the way to a 2-0 win over Serbia in a friendly in Switzerland, handing Sinisa Mihajlovic a losing start as coach of the Serbs.

For much of the game, Spain’s performance was as disjointed as their tournament preparations but a 10-minute spell of inspiration midway through the second half handed Serbia coach Sinisa Mihajlovic a defeat in his first match in charge.

With Spain forward David Villa out of the tournament after failing to recover from a broken leg, Roberto Soldado, Alvaro Negredo and Lopez were all given a chance to show what they could produce. Arsenal Striker Danny Welbeck: Exciting Time To Be With England