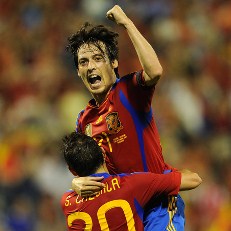 Scotland’s Euro 2012 hopes ended in Alicante tonight as they were outclassed by all-conquering Spain at the Estadio Jose Rico Perez.

Craig Levein’s side needed an unlikely win over the reigning world and European champions to guarantee them a play-off spot in Group I or at least match Czech Republic’s result in Lithuania.

However, a first-half double from David Silva was a testament to the home side’s superiority – and the Czechs streaked into a three-goal interval lead themselves.

David Villa netted Spain’s third goal in the 54th minute to end any semblance of a contest before Scotland substitute David Goodwillie scored a consolation goal from the spot after Victor Valdes had fouled Craig Mackail-Smith.

However, with the Czech Republic completing a 4-1 win over Lithuania, it was all over for the Scots.