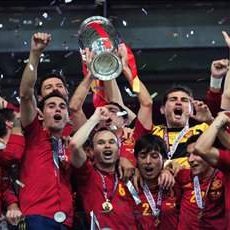 Spain secured a unique place in football’s long history by becoming the first team to win three successive major tournaments when beating Italy 4-0 in the final of Euro 2012 at Kiev’s Olimpiyskiy Stadium.

Extending their incredible record of not conceding a goal in knockout football since the 2006 World Cup – a run that now stands at almost 1000 minutes – Spain added to their triumphs at Euro 2008 and the 2010 World Cup with their crowning achievement: a comprehensive victory secured by three wonderfully-constructed goals that were true to the team’s trademark style, and a late fourth to ensure the biggest margin of victory ever seen in a final at this tournament.

This was a night when Spain’s dominance of international football became more absolute than any team’s before them. The much-discussed philosophy of ultra-control, tiki-taka, allowed them to suppress yet another opponent; their intricate and wonderful passing overwhelming an Italian midfield that prior to Sunday night had excelled at Euro 2012, but for the last 30 minutes of this game in Kiev was depleted by an injury to Thiago Motta after all three Italian changes had been made.