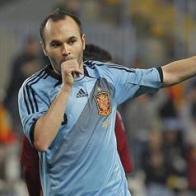 Roberto Soldado scored a hat-trick as Spain cruised to their 27th consecutive victory on home soil over 10-man Venezuela in Malaga.

Andres Iniesta opened the scoring with a calm finish from Cesc Fabregas’ pass before the former Arsenal man also set-up David Silva to stroke home the second just before half-time.

Vicente del Bosque introduced Soldado at the interval and he made the most of his long-awaited opportunity by scoring twice in the three minutes after the break.

The Valencia striker was briefly denied his hat-trick as his penalty was saved by Dani Hernandez, after Fernando Amorebieta was sent off. Soldado did eventually get his third of the evening, benefiting from great wing-play by Jordi Alba seven minutes from time.

The world champions friendly results away from home have been less than stellar in the past year, but they never looked in any danger here as Venezuela defended in numbers for the entire 90 minutes in a failed attempt to keep the score down.