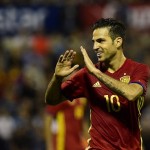 Reports are out claiming that Chelsea midfielder Cesc Fabregas was delighted with Spain’s comfortable 2-0 win over England on Friday.

The former Arsenal and Barcelona star believes that Spain’s “impressive” win over England shows they are back on track and can be a test for any nation in the build-up to the 2016 European championships.

“We recovered things we were missing at the last World Cup,” the Chelsea midfielder told ITV.

“Tonight we proved we can beat anyone because England are a great squad full of quality players.

“The way we played against them showed our football was impressive.”