It has been reported that Sparta Prague are weighing up a move for Arsenal midfielder Tomas Rosicky. 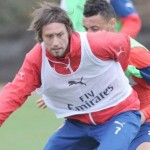 Rosicky only recently signed a new contract at the Emirates Stadium.

But Daniel Kretinsky, Sparta’s major shareholder, said: “I’d love him to come and for it to happen soon, but I don’t want to put uncomfortable pressure on Tomas.

“It’s up to him, I understand that leaving Arsenal isn’t easy.”