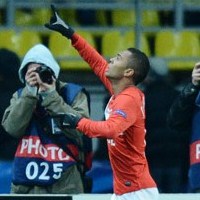 An impressive first-half display and a brave second-half rearguard earned Spartak Moscow their first Champions League points of the season as they beat Benfica 2-1.

Rafael Carioca rounded off a slick break with a classy finish to give the hosts a third-minute lead and, although Rodrigo Lima headed Benfica level at the Luzhniki Stadium, a Jardel own goal restored Spartak’s lead before half-time.

It was all Benfica in the final half-hour but Lima and Eduardo Salvio wasted good chances to equalise.