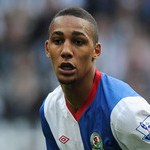 Interesting news are out and it has been revealed that Spartak Moscow are chasing Blackburn Rovers midfielder Steven Nzonzi.

The Daily Mail reported that the Russian side are launching an £8million bid for Nzonzi, 22.

The midfielder has been one of the few success stories at Blackburn over recent seasons and manager Steve Kean would be reluctant to let him go.

However, Blackburn would find it difficult to reject substantial offers for a player who cost them just £500,000 from Amiens in 2009.