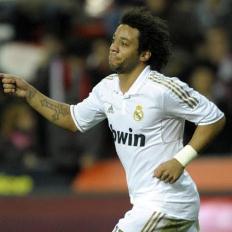 Real Madrid maintained their impressive form at the top of the Primera Division with a 3-0 victory at Sporting Gijon.

Goals from Angel di Maria, Cristiano Ronaldo and Marcelo gave Jose Mourinho’s team a 14th win on the trot in all competitions. This was their 10th in succession in the league, keeping them in control at the head of the table.

Ronaldo had the first chance of the game but his shot from 20 yards in the 18th minute went wide.

Di Maria was next to threaten less than two minutes later, but goalkeeper Juan Pablo was equal to his 18-yard effort.

Ronaldo drilled over in the 25th minute, before Argentinian international Di Maria opened the scoring 10 minutes later, taking advantage of slack defending to advance on goal and tap in from close to the byline.