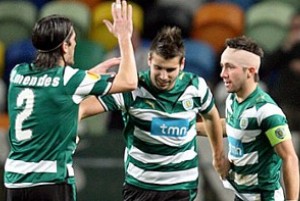 David Moyes saw his Everton side humbled in Lisbon for the second time this season and crash out of the Europa League in the process as they were beaten 3-0 on the night and 4-2 on aggregate by Sporting.

Holding a 2-1 advantage from the first leg and on the back of a superb victory against Manchester United, the Toffees were widely expected to complete the job in Portugal.

However, Sporting shrugged off their indifferent form to progress to the last 16 thanks to second half goals from Miguel Veloso, Pedro Mendes and substitute Matias Fernandez.