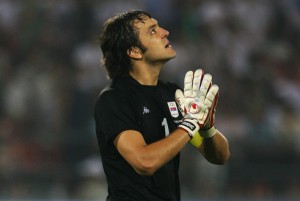 Sporting Lisbon goalkeeper Vladimir Stojkovic has joined Wigan on loan until the end of the season, according to the Portuguese club.

The 26-year-old Serbia international’s arrival will cover for the loss of second-choice stopper Richard Kingson, who will head to the 2010 African Nations Cup next month with Ghana.

A statement on Sporting’s official website read: “Goalkeeper Stojkovic has gone on loan until the end of the season to English side Wigan Athletic.”

Stojkovic joined Sporting from Nantes in July 2007, but has been unable to claim number-one jersey from Rui Patricio.

He spent a spell on loan at Spanish side Getafe at the start of the year, and is likely to be Serbia’s first-choice keeper at the World Cup this summer. Manchester United Has No Plans To Welcome Back Nani