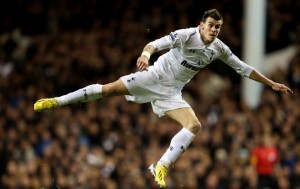 Tottenham star Gareth Bale has claimed Spurs are now a better side than Arsenal after overtaking their fierce rivals in the quality stakes.

The north Londoners are on course to secure a UEFA Champions League spot after impressing this season under Andre Villas-Boas.

Bale and his Spurs team-mates currently sit in fourth position in the Premier League table, one point above fifth-placed Arsenal. However, Monday’s clash against West Ham will provide the opportunity for Andre Villas-Boas’ men to go four clear, and Bale says it is no less than Spurs deserve.
“I think five or 10 years ago Arsenal were always miles ahead of Tottenham. But that has changed in recent years,” he told the Sun.

“Over the past few seasons we have closed that gap and I think now we have overtaken them on the pitch. I think we have the stronger squad. Hopefully we can continue to do that as a club off the pitch as well, with the new stadium that is being built.

“But on the pitch and as a team now we are a lot more consistent and as a club we’re moving in the right direction. Arsenal may say they are still ahead of us. But whatever people’s opinions I don’t think anyone can deny we are up there fighting with them on merit now.”
The two clubs will meet next Sunday in a fixture that could determine who will claim a valuable Champions League berth for next season. Last week, reports claimed Bale was close to moving to the Emirates from Southampton in 2007, but the left winger insists such speculation is wide of the mark.
“I don’t remember Arsenal being interested in me, to be honest. But anyhow it wouldn’t have made a difference as I made my choice to come to Tottenham on footballing decisions.