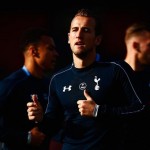 It has been reported that Tottenham boss Mauricio Pochettino was asked this morning about reports of Manchester United bidding for Harry Kane.

Pochettino has laughed off the speculation linking United with a renewed bid for Kane.

When asked on United’s interest, he said: “I smile, because even now it’s too early to speak about rumours.

“But you know in football this is normal.”