Reports are out claiming that Tottenham manager Mauricio Pochettino has expressed his delight at the selection of Harry Kane in the England national squad. 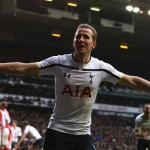 After much speculation, the in-form striker who has scored 26 goals this season, has been called up for the first time for national duty by manager Roy Hodgson.

Kane will look to make his international bow in the Euro2016 qualifier against Lithuania on March 27 or the friendly with Italy four days later.

Asked about his own international debut, Pochettino said: “It’s a long time ago!

“It’s a moment when you want to stop time and enjoy it. It’s a fantastic moment and my advice to Harry would be for him to enjoy it. Time goes so quickly, so enjoy it.

“We feel proud for Harry, so do all his team-mates and for the club it’s special because this is a player who has come through the Academy system.