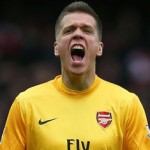 He says Arsenal’s north London rivals do not have enough quality to finish inside the top four this season.

“I was convinced that Tottenham had drawn 0-0 against Southampton, I only found out after the game that they had won 1-0, but I don’t think it matters really,” Szczesny told Arsenal Player.

“If we win our next two games it will be enough because either Chelsea or Spurs will drop points because they play each other.

“If you look at Chelsea’s fixtures, they have Tottenham and Everton left and they won’t be easy games. And Tottenham do not have enough quality, so there you go…”