It has been reported that Tottenham legend Glenn Hoddle is surprised by the make-up of Arsene Wenger’s Arsenal midfield. 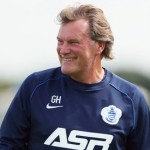 He wrote in the Mail on Sunday: “Arsene Wenger was a hugely important manager in my career at Monaco but there is one thing that has puzzled me about his Arsenal teams in recent years.

“At Monaco he was very clear about how we would play. We had two strong midfielders in Marcel Dib and Jean Philippe Rohr: solid players who were fierce in the tackle. They were good players but they also made sure our back four were protected.

“When he went to Arsenal, he did exactly the same with Patrick Vieira and Emmanuel Petit, and then Gilberto Silva.

“Which is why I’m scratching my head a little when I see the players Arsene selects in midfield these days. Last March, in that infamous 6-0 loss to Chelsea, he played Mikel Arteta, Santi Cazorla and Alex Oxlade-Chamberlain. They’re all fine players but none of them is quite like those midfielders he used to favour.”