It has been reported that Tottenham manager Tim Sherwood was quick to heap high praise on Emmanuel Adebayor following his two-goal performance in Sunday’s 3-1 win at Swansea City. 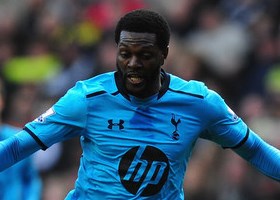 The former Arsenal and Manchester City star headed home in the 35th minute and netted from close range in the 71st to make it five goals in his past seven Premier Leaguye outings.

The brace also led to a fifth victory from six matches since Sherwood replaced Andre Villas-Boas and the new boss was thrilled with how the Togo international had contributed.

“It’s obviously great for the football club and it’s great for Ade himself.

“He’s flying at the moment and he’s enjoying his football. He’s playing with a smile on his face and he’s finding the back of the net.”

A 53rd-minute own-goal from Chico Flores also helped Tottenham’s cause before Wilfried Bony pulled one back for the Swans with just over ten minutes remaining.