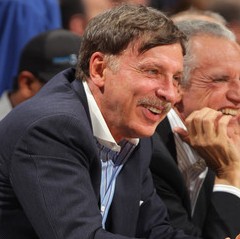 It has been revealed that Arsenal majority owner Stan Kroenke has given Arsene Wenger his full backing.

While being aware of the unrest among supporters after Tuesday night’s embarrassing defeat against Bradford, the club’s American owner is unequivocal in his belief the Frenchman remains the man to lead the Gunners, says the Daily Mail.

Kroenke will back up his support with a massive January transfer budget and will tell Wenger to spend heavily in a bid to transform the club’s faltering season.

Wenger’s current contract expires in 2014 and there is currently no thought in the mind of Kroenke and the Gunners board to terminate the deal.

Martin Keown : Future Without Wenger At Arsenal Is Unthinkable!