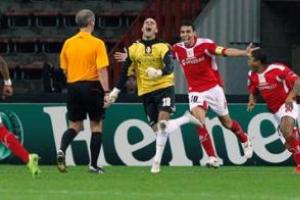 An injury-time goal from goalkeeper Sinan Bolat sent Standard Liege into the Europa League at the end of a thrilling encounter with AZ Alkmaar in Belgium which ended 1-1.

The Turkish goalkeeper headed home five minutes into time added on to equalise and send the Belgian champions through at the expense of the impressive Dutch side.

Bolat ran the length of the pitch after heading in Milan Jovanovic’s free-kick and sent the home crowd – who were boisterous throughout – into a frenzy.

Standard had half an eye on the Champions League at the beginning of the night but those hopes began to slip away as they fell behind to a neat finish by Jeremain Lens and news came through that Olympiacos were winning against Arsenal.