It has been reported that Standard Liege starlet Michy Batshuayi has welcomed interest from Arsenal. 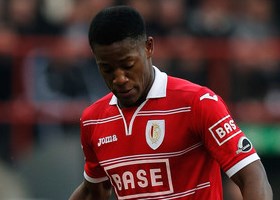 The young Belgian is being linked with Arsenal and Borussia Dortmund.

He told Het Laatste Nieuws: “I don’t think I think will be playing in Belgium next season. My parents, especially my dad, think I’m ready for the next step.

“This summer there was some interest, but I decided I didn’t want to leave Standard without leaving a trace – being champion or being top scorer.

“I’ve two dreams clubs in Europe – Arsenal and Borussia Dortmund. Borussia because of their mix between quality and spirit, Arsenal because they give opportunities to young and talented players.”