TFM’s Stars of the future is back. Under this topic, we at TFM will present to you the young footballers who we think will be the stars of tomorrow, youngsters who we believe will make their mark in football soon.

Previously we featured AC Milan striker Dominic Adiyiah and we now look at Haruna Lukman of AS Monaco. 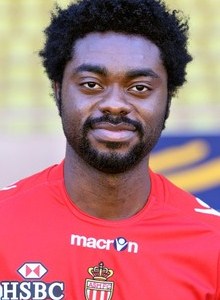 Haruna Abdulkarim Lukman is a 19 year old midfielder who plays for French club AS Monaco after being signed from Moderate Stars Academy and Global Crystal Academy in Nigeria.

Haruna Lukman was born on the 4th of December 4 1990 in Jos, Nigeria and also plays for the Nigerian national team.

Lukman attracted plenty of interest from European giants such as Real Madrid, Atletico Madrid, Bayern Munich, FC Porto and Benfica but the talented youngster decided to sign for AS Monaco in January 2008.

Lukman is making a name for himself with his astonishing dribbles, vast movements and passing accuracy.

Lukman was an active member of the Nigerian U19 and U20 team. He won the 2007 U-17 African and World titles with Nigeria and he captained the team throughout the tournaments.

At the tender age of 18, Lukman was called into the provisional Nigeria national football team squad for the 2008 African Nations Cup. However he did not make the team and was cut from the final 23-man squad to make way for more senior players.

The disappointment did not last as Lukman finally made his his debut for the Super Eagles in the warm-up game with Sudan in which Nigeria won 2–0.

Nigeria’s manager Berti Vogts cited his inclusion as a way of gaining valuable experience. On 6 December 2008 was called up for the 2009 African Youth Championship.

At the age of 19, the talented midfielder was called into camp ahead of the 2010 World Cup. This is a dream come true for Lukman.

He scored his first goal in a friendly May 30, 2010 against Colombia. He later played for Nigeria in the World cup which Nigeria crashed out at the Group stage.

Haruna Lukman has so far played a total of 27 games for Monaco and scored a total of 3 goals from midfield. He also has 7 caps for the Super Eagles and scored 1 goal on the international stage.

Haruna Lukman is definitely a player to watch for the future and we at TFM are sure that this talented star will end up playing for European super-giants such as Barcelona or Inter Milan in the near future.