TFM’s Stars Of The Future is back and we will now take a look at the next Brazilian sensation from Santos, Neymar. 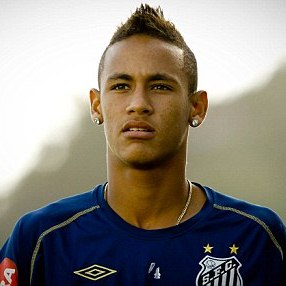 Neymar da Silva Santos Júnior or commonly known as Neymar, is a 19 year old Brazilian football star who currently plays as a striker for Brazilian club Santos and the Brazilian national football team.

He is considered as the future of Brazilian football and is being chased by clubs all across Europe including Real Madrid, Barcelona, Chelsea, Manchester United, Inter Milan, Juventus and many more.

Following this, Santos placed an asking price of €30 million on the player’s head, and tied Neymar down to a new contract lasting until December 2014.

Neymar himself said he did not think it was time to leave Santos, and that he was only focused on the club.

Neymar’s performances for Santos have drawn comparisons to Brazilian idols such as Robinho and Pelé.

Neymar is known to be a lover of the beautiful game and begun his youth career in 2003 at the tender age of 11. 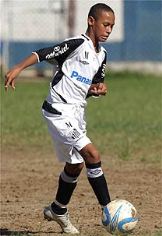 The talented youngster joined Santos and began training in the youth set up developing his skills and technical abilities.

He he patiently waited and trained in the youth set up before being promoted to the Santos senior squad in 2007.

This was a dream come true for Neymar as all his hard work and dedication has finally paid off.

Neymar didn’t take long to settle down and the young striker scored his first ever goal for Santos in his next appearance against Mogi Mirim a week later.

On 11 April 2009, in the 2009 Campeonato Paulista semi-final first leg against Palmeiras, Neymar scored the decisive goal in a 2–1 win at Estádio Vila Belmiro.

Neymar however could not help Santos win the final as his side suffered a 4–2 aggregate loss to Corinthians. The Brazilian youngster then went on to make a total of 112 appearances for Santos and scored a total of 57 goals in all competition.

Following the 2010 Campeonato Paulista in which Neymar scored 14 goals in 19 games, the club were crowned champions after a 5–5 aggregate win over Santo André in the finals.

Neymar was subsequently given the award for the best player in the competition.

Neymar began representing Brazil in U-17 squad where he made three appearances scoring one goal.

In 2011, the striker was moved up to the Brazil U-20 squad where he scored 7 goals in 6 appearances.

Following his impressive performances for the Brazilian youth side, Neymar was tipped to be included in the Brazil squad for the 2010 World Cup in South Africa. 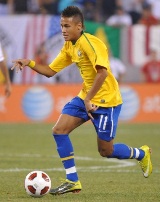 Brazilian football legends such as Pele and Romario even went to the extent of urging coach Dunga to take Neymar to the 2010 World Cup but this was not to be as the youngster was left out due to his inexperience in the international level.

However this disappointment did not last long as Neymar was selected in the squad for the Brazil team by new head coach Mano Menezes for a friendly match against the USA on 10 August 2010.

The Santos starlet started the game and wore the number 11 jersey.

He then made his mark in the international stage when he scored on his debut after 28 minutes, a header coming from an André Santos cross in a 2–0 win for Brazil.

Neymar has been often compared to Brazilian greats such as Pele and Robinho.

The young striker is well known for his pace and dribbling ability which often leaves defenders chasing his shadows.

Neymar is also known for his flamboyant style and Brazilian flair.

Neymar is also a two-footed player and has the ability to finish with either foot.