TFM’s Stars Of The Future is back once again and this time we take a look at a rising star from Turkey, Sercan Yildirim of Bursaspor. Yildirim is 5ft 11in and his natural position on the pitch is as a striker but is also often deployed as an attacking midfielder. 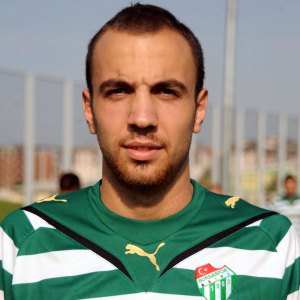 Turkey has produced some of the finest footballers over the years. Players such as Tuncay Sanli, Yildiray Basturk, Hamit Altintop, Mesut Ozil, Serdar Tasci, Gokhan Inler, Gokdeniz Karadeniz and many more have made their mark in European football.

Turkey now is ready for the rise of their newest sensation. Sercan Yildirim is a Turkish footballer who plays in the Turkish Süper Lig for Bursaspor as a striker. Sercan Yildirim was born on the 5th of April 1990 and that makes him 20 years of age as of now.

Sercan Yildirim is said to be a product of the Bursaspor youth set up and made his way up until he broke into the senior squad in 2006.

Yildirim has so far spent his entire career at Turkish club Bursaspor. He broke into the first team in the 2007–08 season making his league debut during as a second half substitute in a 1–0 away defeat at Istanbul B.B in September 2007.

He scored his first senior goal for the club three games later in a 2–0 win at Kasimpasa. His first season saw him only featured eight times for the senior team.

In the 2008/2009 season, Sercan Yildirim’s performance caught the eye of bigger European clubs. In October 2008 it was rumoured that Manchester United were interested in him. At the end of the 2008–09 season, Sercan Yildirim was Bursaspor’s top goalscorer in both the league and in all competitions, netting 11 goals in 30 appearances in the Super Lig and 14 goals in 35 appearances in all competitions.

The speculation regarding his future continued in the summer of 2009. Istanbul giants Fenerbahçe were thought to be most likely to sign him, although there were reported interest from Premier League clubs such as Liverpool, Manchester City and Wigan Athletic.

The young striker however was constantly linked with giants Manchester United who were said to be preparing a £3.5m bid but nothing materialized and in early August he started the season playing for Bursaspor.

The 2009–10 season was not really a great season for Sercan Yildirim after he suffered an injury in September was forced to be sidelined for six weeks. He returned to action in November and scored a hat-trick in a Turkish Cup game against Sivasspor in January 2010, sending Bursaspor through to the semi-finals against Fenerbahce.

Yildirim has so far made a total of 69 appearances for Bursaspor and scored a total of 19 goals along the way.

Sercan Yildirim began his international career at the tender age of 15 has played at every age group for the Turkish Youth International Team. 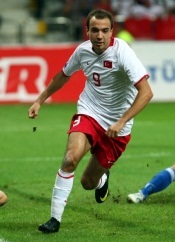 Whilst playing for the Under-16 level during 2006, he scored 12 goals in 10 games, including a hattrick and three braces.

Yildirim was handed his first ever call to the Turkish senior squad by Fatih Terim in March 2009, for two 2010 World Cup Qualifying games against Spain. However, the then 19 year old striker ended up warming the bench and was an unused substitute.

This setback however did not last long. Yildirim finally made his debut for Turkey in a friendly against Azerbaijan on 2 June 2009, coming on as a second half substitute for Tuncay Sanli. On 12 August 2009, in a friendly against the Ukraine, he managed to provide 2 assists in Turkey’s 3–0 win. He scored his first goal for Turkey on 5 September 2009 in Turkey’s World Cup qualification game against Estonia.

Yildirim has made a name for himself as a versatile player. He can play in a supporting striker role by playing a bit deeper. He can also play as an attacking midfielder and on the left wing.

At 5ft 11in, Yildirim’s pace and acceleration are his main weapon and has earned him the name as the one of the most promising young strikers in Turkey.

In January 2010, Yildirim was voted as the eighth most popular European footballer of 2009, and the 21st most popular in the world, by the IFFHS.

Yildirim has also been nicknamed the Lionel Messi of Turkey.