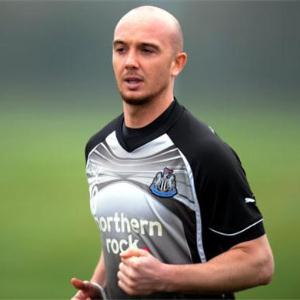 Reports are out claiming that Stephen Ireland is set for his Newcastle United debut against Manchester United on Tuesday night as he attempts to re-launch his career.

The 24-year-old midfielder has endured a nightmare two and a half months since making a loan move from Aston Villa to St James’ Park in a bid to get some football under his belt after falling out of favour at Manchester City and then failing to make an early impression following his £8million summer move to the midlands.

Magpies boss Alan Pardew has challenged Ireland to use the final six games of the season to convince him he could have a long-term future at St James’, and he is looking forward to seeing him try to do just that. He said: “Stephen Ireland will be involved in this game and that’s a big bonus because we have been waiting a long time for Stephen.”

Ireland arrived on Tyneside with a knee injury and then picked up a thigh strain, and he has spent the past few days at the bedside of partner Jessica Lawlor after she suffered multiple injuries in a car accident last week.

Pardew added: “His quality will help us in the last six games for sure. Technical quality – that’s what he brings. You have got a player who has played at the highest level, and we have waited long for him because of his injuries and setbacks that he’s had. But hopefully, that will bear some fruit in the last six games.”