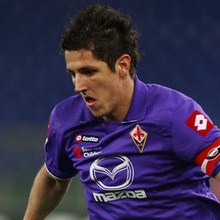 It has been revealed that Fiorentina ace Stevan Jovetic is keen on a move to Juventus.

Despite penning a new deal earlier this season, Jovetic is expected to quit Fiorentina in the summer in search for Champions League football.

Chelsea have been linked with the Montenegro international, however he hopes Juve come knocking.

According to , Tuttosport, Jovetic has made it clear he wants a move to the Bianconeri and sees himself as Alessandro del Piero’s replacement.