It has been reported that Hull City boss Steve Bruce suggests it will be important for the club to bring in some quality players this summer. 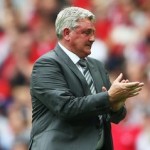 The Tigers are into the Europa League qualifiers after making the final of the FA Cup – which they lost 3-2 to Arsenal on Saturday – and Bruce is well aware that they will need to strengthen in the offseason to deal with the increased schedule.

“We have to look forward to European football and we will have to try to enjoy it, but whether we have got the resources and the manpower, I am not so sure,” said Bruce.

“We certainly need another five or six players. We’ve got two, three or four who are out of contract, so we’ll now decide what we’re going to do and plan a way to come back again.

“We have to improve, to get better, because you cannot stand still.

“I think we’ve got four (European) games by the end of August. And a club like ours, I don’t think we’re ready for that. But we’ll have to give it a shot when it comes around.

“That is always the challenge, can we get bigger and better?

“We are spending a lot on the academy and have to produce a few players, but that is one for the future I suppose.”