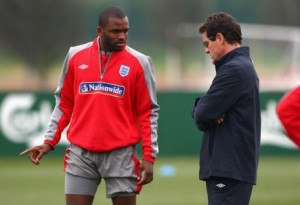 Former Tottenham striker Bent has been left out by Three Lions boss Fabio Capello during his reign but after scoring seven goals in eight games this season, Bent was tipped for a recall.

However, he missed out on Capello’s line-up for the match with Ukraine on Saturday and Steve Bruce said that he was not surprised.

Bruce added that Fabio Capello has not made many changes from the day he took over as the manager of England.

Bruce said that Capello is an experienced manager and and that there is no reason why he should change anything when people have done well for him, as the England team have over the last 18 months.

Bruce went on to say that all that Darren Bent can do is keep playing well and his chance will surely come as there is still six months to go for the World Cup.

John Terry Set To Be Reinstated As England Captain