Reports are out claiming that Liverpool skipper Steven Gerrard feels they can sustain a title challenge this season. 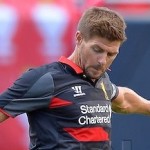 The 34-year-old insists that Brendan Rodgers’ side believe that they can go one better than their 2013-14 second-place finish and win their first league title in 24 years.

Speaking about the last season’s campaign and the upcoming season, Gerrard told the Daily Mirror: “With 10, 12 games to go, people were maybe expecting us to drop away a lot sooner than we did. But we handled the pressure superbly well and we played some unbelievable football.

“We are a good team, with a good manager, that is getting stronger. The confidence is rising in the dressing room and we have got to show that we are the real deal.

“We are not there to just make the numbers up. There is genuine belief that we can be in there.

“Good sides don’t just have one good season. They keep trying to fight for what they want. Chelsea do it. Manchester City do it. Manchester United have had a one-off bad season and they will be back. Arsenal have made a couple of really good signings.

“The league is going to be very, very tough but we know we are one of the sides that has got a genuine chance of winning it. I believe that.”