Reports are out claiming that Liverpool captain Steven Gerrard was delighted with Mario Balotelli’s debut in victory at Tottenham. 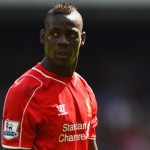 The Italian international striker contributed well before being substituted after an hour, linking up effectively with the likes of Raheem Sterling and Daniel Sturridge.

And Gerrard, who fired Liverpool’s second goal from the penalty spot in the Premier League win, said of the former Manchester City striker: “I thought he was terrific.

“All eyes were on him today, wondering whether he was going to work hard for the team… was he going to hold the ball up for us?

“Credit to him, I thought he was terrific for an hour.

“If he plays like that for us every week and continues to improve, he could be the difference whether we compete or not.”