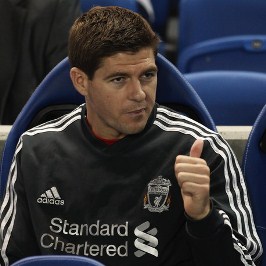 The Liverpool captain made his first appearance in six months as a late second-half substitute.

Asked if Brighton’s spirited display prevented him from entering the fray earlier, Gerrard told liverpoolfc.tv: “It did actually. If we were two or three up at half-time I might have had a few more minutes, but tonight wasn’t about me.

“It was about progressing into the next round and getting that Tottenham performance out of our system, which we did tonight.”

He added: “It’s down to the manager now. Obviously I’ve been out for six months so it’s all about getting training sessions and match time under my belt, so I can get match fit and get to the form I want to be at.

“It’s just nice to come through the first test. Now, I’ll train tomorrow and hopefully I’ll be selected in the 18 against Wolves and get some more game time.”

Luis Suarez Fearful Of Picking Up Injury Before The World Cup