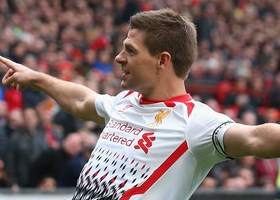 The Reds produced a stellar display at Old Trafford to go within four points of league leaders Chelsea thanks to a brace from Gerrard and yet another goal from Luis Suarez.

After the match, the England international acknowledged a change made by Rodgers – swapping Philippe Coutinho for Raheem Sterling – and suggested it was so positive by the boss to make alterations such as this to keep things fresh in the Reds squad.

“I think you’ve got to give credit to the manager,” Gerrard told Sky Sports.

“He keeps switching it, tinkering with the formation and the tactics. We played a diamond today and totally bossed it in the middle of the park.

“When you come away from home you’ve got to keep the ball and dominate the middle of the pitch and we know if we do that, we’ve got two of the best strikers in the world to do the damage.

“I’m sure if you ask the Manchester United defenders today, I don’t think they’ve ever had a harder 90 minutes than that.”