Steven Gerrard has declared that Liverpool are confident going to Tottenham this weekend. 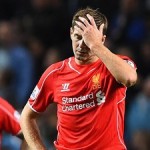 The former England international acknowledges it’ll be a difficult contest in north London, but is insistent that confidence hasn’t been dented by Monday’s reversal at Manchester City.

The captain told liverpoolfc.com: “It’s going to be very tough. Tottenham away is a difficult match. They’ve started the season really well, have a new manager and have their confidence and belief back.

“We’ll have to perform at our maximum to get the result we want, but we’re going to go there for three points and we’re confident we can get them.”