It has been reported that Liverpool skipper Steven Gerrard has paid tribute to Manchester United ace Wayne Rooney. 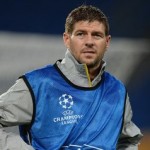 Rooney is set to earn his 100th England cap tomorrow.

Gerrard told ITV Sport :I think it would be fully deserved for a player of his calibre and for what he’s done for Manchester United even though it kills me saying it,”.

“He’s taken that onto the international stage and he’s been consistent with goals and performances.

“In years to come anyone who is looking back at records and looks at goals and caps, Wayne Rooney’s name will come up and I think he deserves both accolades.”