It has been reported that Liverpool captain Steven Gerrard is considering walking away from the game at the end of the season. 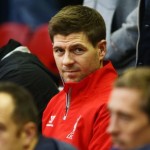 The Daily Star reported that the former England international is giving serious thought to calling it a day.

The 34-year-old has been offered a new two-year deal, with his current Liverpool contract expiring in the summer.

That offer is understood to include a reduction on his current £140,000-a-week terms and boss Brendan Rodgers insisted yesterday there is no rush for Gerrard to make up his mind.

But the former England captain is understood to have serious concerns about his own fitness and form this season.

An immensely proud man, Gerrard does not want his brilliant career to fizzle out although publicly he has insisted he will not be retiring.

However behind the scenes Gerrard’s concerns about his future have been a major talking point at both Anfield and Liverpool’s Melwood training ground.