It has been reported that Liverpool legend Mark Lawrenson wants to see Steven Gerrard retire from England duty. 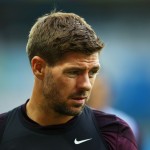 Lawro wrote in the Liverpool Echo: “The time is right for Steven Gerrard to retire from international football.

“I never like suggesting retirement, especially regarding someone of Steven’s stature and a player who has been such a fantastic servant to the game, but it’s time.

“Roy Hodgson indicated he’d like his skipper and biggest ally to stay on until the Euros.

“But retire now and he preserves his Liverpool career even further.”