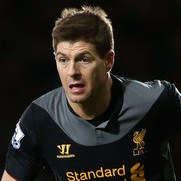 The Reds face Aston Villa, Fulham, Stoke, QPR and Sunderland over the next four weeks, and Gerrard believes they must capitalise on the momentum they have started to generate.

Gerrard told the Liverpool Echo : “We’re building slowly towards where we want to be,”.

“If we can capitalise and make it 12 points out of 12 then we will find ourselves a lot closer to fourth.

“It’s a platform to build on. We just have to focus on Villa now. Come the end of December we’re really looking to be close to that fourth position.”