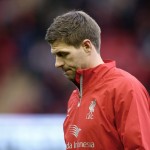 Reports are out claiming that Liverpool captain Steven Gerrard has thrown down the gauntlet to teammates ahead of their clash with Arsenal.

The 34 year old former England international hints not everyone has been giving their all.

“Everyone knows if we perform the way we have done of late against Arsenal we’ll get beaten,” admitted Gerrard.

“When you have a strike-force of Daniel Sturridge and Luis Suarez, they are capable of killing teams in 20 minutes. It’s different this year and everyone knows that.”