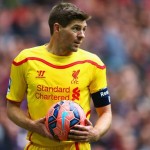 Reports are out claiming that Jamie Redknapp has stated that his ex-teammate Steven Gerrard will be devastated by the FA semi-final loss against Aston Villa – not for himself but for Liverpool.

A victory in the FA Cup had been seen as Gerrard’s parting gift from Anfield when he leaves the club for the LA Galaxy at the end of the season but it sadly did not come to fruition as the Reds stumbled to a disappointing 2-1 loss at the hands of Aston Villa on Sunday.

Now Gerrard looks set to make an exit from Liverpool in a much more quiet fashion than first hoped but former teammate Redknapp has stated that rather than being upset for himself, the 34-year old will be more upset at his beloved club missing out on a chance to win a trophy this season.

Redknapp wrote in his column for the Daily Mail: ‘Of course, for sentimental reasons I wanted Steven Gerrard and Liverpool to get to the final. What better way for one of Liverpool’s greatest ever players to depart the club than with an FA Cup win?

‘It is a shame he won’t be there but he has probably achieved more at Liverpool than he would ever have dreamed of. And if there’s anybody who thinks about the team rather than himself, it’s Stevie. He will be devastated not to make the final but for the club’s sake, not his.’