It has been reported that Everton have confirmed that Steven Naismith has signed a new deal with the club. 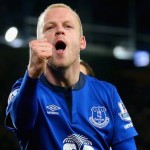 The 28-year old Scotland international has penned a three-year extension keeping him at Goodison Park until at least the summer of 2019.

The former Rangers star was already contracted until 2016 but opted to take the Toffees up on their offer and commit himself to the cause for the foreseeable future.

“I am so happy here. From the moment I signed my first contract here it wasn’t long before I saw what a great club it was,” Naismith told evertontv.

“Over the months and years it has progressed into a fantastic move for myself on and off the park. I am delighted to have agreed an extension which will keep me here for a few more years yet.

“When you come to the last 18 months of your contract, negotiations start happening and it was pretty relaxed and straightforward because I have loved my time here and this season and last season you have seen the best of me; hopefully there’s more to come.”

Since joining from Rangers in July 2012, Naismith has scored 19 goals in 86 appearances for Everton including five in the Premier League this season.