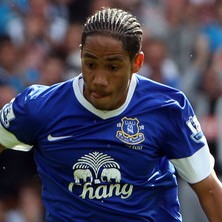 It has been reported that Everton midfielder Steven Pienaar has called his retirement on his international career with South Africa.

The 30-year old made the decision this week with South African Football Association chief executive Robin Peterson making the announcement at a press conference today.

“I’m proud to have played for and captained my country. For that I thank you,” read Pienaar’s statement.

Recently-appointed Bafana Bafana head coach Gordon Igesund added: “He’s given us 10 years of service and his body is tired.”