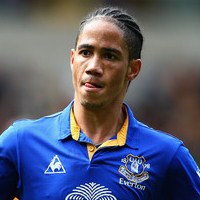 Steven Pienaar has ended his loan spell with Everton and returned to parent club Tottenham unsure if he will return to Goodison Park.

After his final game Pienaar saluted the home fans and then gave an emotional interview to Everton TV in which he said:” “It’s hard. The first time I left I didn’t say goodbye, this time around it’s a bit sad. I just want to say thanks for the support from day one. I really appreciate it. ”

“It means a lot to me, this club. Let’s just see what will happen in the summer.”

Pienaar, who originally joined Everton from Borussia Dortmund in 2007, has played a key part in the club’s turnaround, which eventually saw them finish above rivals Liverpool for the first time in seven years.

“Finishing above Liverpool is unbelievable feeling and in the second half of the season the guys were fantastic. I was glad to be a part of that,” added Pienaar.

“For me it was important to finish the way I started – with a goal.

“I think my loan spell went well. I am pleased with myself.

“Don’t forget, I didn’t play much in the first half of the season and the only way I could pay the manager and the supporters back was by performing and I think I did quite well.”