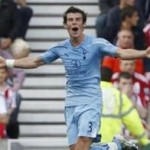 Gareth Bale’s contrasting double made up for Tottenham’s lack of firepower and earned Harry Redknapp’s team a second win in the Potteries this year. But it was mired in controversy.

The Welshman scored either side of Ricardo Fuller’s goal for Stoke – a rebound off his face followed by a sublime volley into the top corner – as Spurs overcame the loss of four forwards to injury on Champions League duty.

However, Stoke were outraged after the debutant Jonathan Walters’s header appeared to have crossed the goalline in the final minute. The stumbling Peter Crouch – Spurs’ one fit forward – was the other side of the whitewash and his block appeared to have been made with his arm.