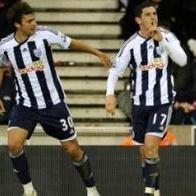 The Scotland midfielder curled the ball beyond Thomas Sorensen after Stoke looked to have earned a point with Cameron Jerome’s 86th-minute header.

James Morrison had given the visitors a deserved lead when his low shot swerved and embarrassed Sorensen in the Potters goal.

Ben Foster also saved a penalty from Jonathan Walters in a dramatic second-half.

Ryan Shotton passed a late fitness test on a bruised foot as Tony Pulis made one change from the side that drew at Liverpool. Wilson Palacios was the man to drop out.