Arsenal slumped to a 3-1 defeat against Stoke on Sunday, all but extinguishing the Gunners’ faint Premier League title hopes. 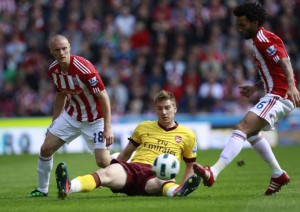 First-half goals from Kenwyne Jones and Arsenal old boy Jermaine Pennant followed by a late Jonathan Walters strike secured a deserved win for the Potters at the Britannia Stadium.

But the defeat means Arsenal are effectively out of the title race, and they will be eliminated from contention later Sunday if Manchester United avoid defeat against Chelsea in the late kick-off.

Tony Adams : Arsenal Will Not Challenge For Titles!