It has been reported that Stoke City boss Mark Hughes was delighted with victory over Arsenal. 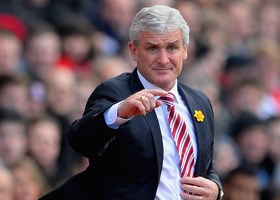 Jonathan Walters won and converted a second-half penalty for the only goal of the game.

Reflecting on a result that sees Stoke’s record at home against Arsenal extend to one loss in the last eight, and follows other notable victories this term in triumphs against Chelsea and Manchester United, Hughes said: “The stars were aligned and it came together. I thought we were excellent on the day to be perfectly honest.

“We were up against a very accomplished Arsenal side with a lot of talent and lot of ability, but we matched that and in the end won the game courtesy of a penalty.

“I’ve been made aware that maybe Arsenal felt it wasn’t a just penalty, but I’m a bit bemused by that as I thought it was clear-cut to most people.

“Regardless of that, we deserved the victory anyway by virtue of what we produced in our general play. All in all it was a very satisfying performance.”

Walters has seen several of his penalties fail to hit the back of the net, and regarding his success this time out, Hughes said: “That is what you get from Jon – he is mentally very strong.

“He takes responsibility every day so it didn’t surprise me that he grabbed the ball, he wasn’t going to give it to anyone else.

“I was really pleased for him that he was able to dispatch it as it was a pressure kick.

“Charlie (Adam) wasn’t too happy that I took him off as he sensed he would get a penalty. But he will get over it.”